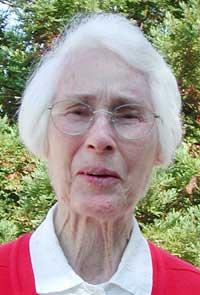 Religious of the Sacred Heart Helen McHugh died December 30, 2011, at Oakwood, the Society of the Sacred Heart’s elder care center in Atherton, California. Her life will be celebrated in a Mass of Resurrection on Thursday, January 5 at the Oakwood Retirement Center, 140 Valparaiso Ave., Atherton CA 94027. Burial will follow immediately in the Oakwood cemetery.

Sister McHugh entered the Society of the Sacred Heart at the Kenwood Convent in Albany, New York on September 14, 1937. She professed her first vows March 15, 1940 and final vows on July 31, 1956, both at Kenwood.

An alumna of the Convent of the Sacred Heart in San Francisco, Sister McHugh earned a bachelor of arts in English from the San Francisco College for Women. Both her Master of Arts and Ph.D. in English came from Stanford University.

Sister McHugh spent much of four decades at the University of San Diego. She first arrived at the San Diego College for Women in 1965 as a professor of English. Over the next 27 years, she served as the chair of both the English department and the fine arts department. Named professor emerita in 1988, she continued to direct a tutoring program and conduct research until she came to Oakwood in 2003.

As professor emeritus, Sister McHugh continued her research and administered a tutoring program for low-income children. In 1998 she was honored with an International Education Award from the Japan Society of San Diego and Tijuana, which she received “as a member of an international group of educators.” She entered prayer ministry in 2007.

You will be missed Sr. McHugh.   It was her love of the  English language, its syntax & proper use that greatly influnced me in my studies.   Masses will be offered for the repose of her soul.  God bless; rest in peace.

Sr. McHugh, you were a great help to me after our Mother died in 2007. You and our Mother went to Sacrd Heart in San Francisco when it was still called The Academy of the Sacred Heart on Jackson Street. Each time a contemporary of our Mom dies, I think you are all reunited in heaven. Much gratitude and many blessings, mv

Allow me to express my deepest gratitude to God the Almighty, Sisters Mary and Helen McHugh, RSCJ, and all members of the RSCJ community for the gift of Faith that you brought to Japan and its people worldwide, including the Emperor and Empress of Japan. As Sister Helen rejoins her sister Mary in Heaven, our Japanese community humbly joins you and the Chapter Eternum of RSCJ in Heaven in praise of the Sacred Heart of Jesus.
Till we meet again,
Michael Shigeru Inoue, retired Honorary Consul General of Japan in San Diego; President Emeritus of the Japan Society of San Diego and Tijuana.