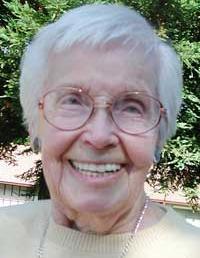 Religious of the Sacred Heart Ida Rinne, died Thursday, October 18, at Sequoia Hospital, Redwood City, CA. A long-time educator, primarily in the Chicago area, her life will be celebrated in a Mass of Christian Burial at 10:00 a.m. Wednesday, November 7 at Oakwood, the retirement center of the Religious of the Sacred Heart at 140 Valparaiso Avenue, Atherton, CA 94027.

A native of the snow country of Brimson, Minnesota, Ida Rinne was born August 18, 1916, one of eight children of Peter John and Selma Katisko Rinne, Sister Rinne was predeceased by all of her siblings: brothers Arne, Felix, Waino and Eino Rinne and sisters Pearl and Martha Rinne and Mrs. M.G. Hettervig. She is survived by her nephews Ted Hettervig of Warrenton OR, John Rinne of Two Harbors, MN, numerous nieces and nephews and great-nieces and –nephews, and more than 2,400 Religious of the Sacred Heart worldwide.

Daughter of “non-religious” Finnish parents, having been baptized a Lutheran, Sister Rinne was provisionally baptized into the Catholic Church in 1938. She entered the Society of the Sacred Heart in 1940, after being introduced to the Religious of the Sacred Heart in Chicago. She made first vows in 1943 at Kenwood Convent in Albany, New York and final vows at the Society motherhouse in Rome in 1949.

“People say ‘I found the Lord.’  I have to say, ‘the Lord found me.’” Sister Rinne said once about her profound religious experience as a young adult.

From 1976 to 1992, Sister Rinne worked a series of secretarial jobs in the Washington, DC area including one at the World Bank. She also took a Clinical Pastoral Education course, classes in art, and spent much time at a senior center painting. In 1992, she began a pastoral ministry with terminally ill patients at a hospice in San Francisco. She then spent many years as a volunteer English tutor in San Francisco. Stories following her death attest to her faithfulness to friendships, sometimes begun in a chance encounter.

In 2000 Ida moved to Oakwood, the Society’s retirement center in Atherton, California, where she developed her gifts as an artist, pursued her interest in Jungian psychology and intentionally invested in a search for an ever-deeper relationship with the God for whom she thirsted.

Sister Rinne earned her Bachelor of Arts degree from Barat College while teaching at the Academy in Lake Forest. She later earned two Masters Degrees, one in English from the San Francisco College for Women, the other an inter-disciplinary degree in psychology/sociology/theology form Mundelein College.

I first met Sr. Rinne on May 26, 2011 as I arrived at Oakwood for a visit. Like a guardian angel she was sitting in her wheelchair at the entrance and greeted me with a great big smile.  I introduced myself and asked her from what part of the US was she from.  She smiled and said "Chicago".  It seemed immediately that we felt a connection.  On Sunday, May 29th Sr. Rinne was there in the Dining Room anxious to hear about my visit and all of the festivities that surrounded graduation weekend for Sacred Heart Prep.  She noticed a silver medal around my neck and inquired if it was my "Child of Mary" medal.  When I said no and told her that it was in fact of St. Madeleine Sophie Barat and produced in the 1920's after she was canonized she seemed intrigued.  Before I left to catch my flight back to Chicago, Sr. Rinne returned to the Dinning Room that Sunday afternoon with her "Child of Mary" medal in hand.  She told me she wanted me to have it and stated that Mother Eleanor Regan also from Minnesota had given it to her after she had entered the Society. May this loving "Child of Mary" rest in peace!