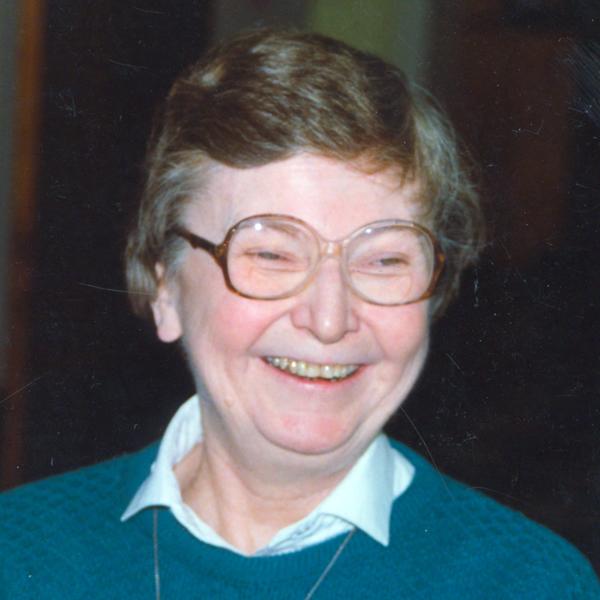 Religious of the Sacred Heart Jean Marie Ford, a model of wise and caring leadership, died on Friday, March 16. Sister Ford accepted the call to serve in leadership in several positions in the Society of the Sacred Heart, including as provincial of the Washington (DC) province, on the first United States provincial council and on the general council of the international community. A Mass of Christian Burial will be celebrated on March 26 at 1:30 PM in the Teresian House Chapel, with a visitation period one hour before the service. Interment will be in the Kenwood Cemetery in Albany.

Born in Boston May 19, 1926, Sister Ford was the daughter of John J. Ford and Mary C. Hageman Ford, both deceased. Her sister, Evelyn Ford (Alexander) O’Connor also preceded her in death. Survivors include her sister Eunice Ford (Stephen) Williams, nephews John Williams, Tim Williams, and Ford O’Connor and Religious of the Sacred Heart around the world. She entered the Society of the Sacred Heart at Kenwood Convent in Albany, professed her first vows in 1951 and made her final profession in Rome, July 30, 1956.

Sister Ford was known, respected and loved throughout the international Society of the Sacred Heart for her wise, compassionate leadership and her simple, heart-deep faith. She was first called to leadership in 1972, when she was named provincial of the Washington (DC) province. She served in that capacity until 1978, after which she worked at Casa del Sol, an arts education program in Boston, while serving on a commission to craft new Sacred Heart Constitutions, a duty which will continue to impact Religious of the Sacred Heart for decades. She continued her work on the Constitutions while serving as curriculum developer for Carrollton School of the Sacred Heart, Miami, 1980-82.

In 1994, Sister Ford moved to Sprout Creek Farm, an educational ministry of the Society of the Sacred Heart in Poughkeepsie, New York. She remained until she entered prayer ministry in Albany in 2009.

In the weeks prior to her death and the days since, messages of love and gratitude have arrived from Religious of the Sacred Heart around the world. A sample: “You know that you have made an enormous difference in my life, a graced difference. What you showed me was patience, and exquisite gentleness, love, and truth! … and maybe a bit of impatience for anything less.”

Another wrote, “She was such a truthful person, very mature in loving. Her mature love of the Society made her such a selfless person in its best sense.”

The messages expressed gratitude for Sister Ford’s selfless service over a lifetime, her simplicity, her wisdom and kindness, and her witness of faith.

Sister Jean Ford was the product of a Sacred Heart education. She graduated from Newton Academy, Newton, Massachusetts. Both her bachelor of arts and her master of arts in history came from Manhattanville College of the Sacred Heart in New York. She also completed a master of arts degree in theology at Providence College, Providence, Rhode Island.

In addition to her leadership roles within the Society of the Sacred Heart, Sister Ford was a member of the Leadership Conference of Women Religious and the National Conference of Christians and Jews.

Jean Ford certainly was a gift to my life as a young RSCJ is less than settled times. She looked straight to the heart of the matter, and somehow was able to sidestep any pressure that would have clouded making a good judgement in the moment. She was a tremendous role mode, inspriation and friend who displayed both compassion and humor.
Jean's ability to faithfully and fearlessly negotiate change and remain centered and other directed as a leader, puts her among the Society greats. I know that she will be deeply missed, but she left her mark on all of us who were fortunate enough to be touched by her graceful presence and influence.

All the comments made about Sister Ford are accurate.  She was a brilliant lady of grace who was a role model and all around lovely woman.  I was very lucky to have had her as Mistress of Studies at Elmhurst and appreciate all the kindnesses and guidance she gave me.

Just saw this so late with comment. It was Jean who gave meaning to my Beacon Street Days even as she was away in Rome 1971 to 1972. Jean you are always in my heart.