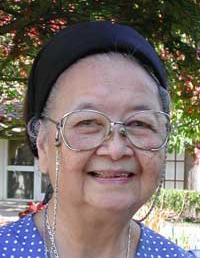 Religious of the Sacred Heart Marina Mapa died Sunday November 18, at Oakwood, the Society of the Sacred Heart’s elder care center in Atherton, California. Sister Mapa taught Spanish at the University of San Diego for more than 30 years. Her life will be celebrated in a Mass of Christian Burial on Saturday, December 8th at 10:00 am, 140 Valparaiso Avenue, Atherton, CA 94027, followed by burial in the Oakwood Cemetery.

Marina V. Mapa, RSCJ, was born in Iloilo City, Island of Panay, Philippines, on September 4, 1925, to Dr. Felix C. Mapa and Virgilia Vargas de Mapa, the eldest of eight children. In addition to her parents, Sister Mapa was preceded in death by her sisters Ofelia Mapa and Margarita Mapa de Ramos and brother-in-law Dr. Gonzalo Ramos. She is survived by her sisters, Josefa Mapa de Noroña, Menlo Park, Ca.; Virgilia Mapa, San Francisco and Dolores Mapa de Keefe, Millbrae, Ca., and brothers, Felix Mapa Jr., San Francisco and A. Raymond Mapa, Daly City, Ca., as well as numerous nieces and nephews. She will be remembered with fond affection by hundreds of students and colleagues, the staff at Oakwood and Religious of the Sacred Heart around the world.

Sister Mapa was of Filipino, Spanish and Chinese ancestry. During the Japanese occupation of the Philippines in World War II, they spent time in hiding. As the oldest of the children, it was Marina’s responsibility to provide food and help take care of the younger ones, which required hard work and courage. Eventually the family moved to the United States. On the ship to the U.S., a Jesuit priest suggested Marina, who was feeling called to religious life, should go to Lone Mountain College and learn more about the Religious of the Sacred Heart, who operated the school. She entered the Society of the Sacred Heart in Albany on September 8, 1947. She made first vows in 1950 and final vows in 1955.

Sister Mapa’s first assignment was as a fifth grade teacher at the Convent of the Sacred Heart in San Francisco, 1950-54. Following her final vows, she began to teach Spanish at San Francisco College for Women, which became Lone Mountain College. For many years, she was also chair of the Spanish department and for two years, the registrar. During this time, she also earned her doctorate in Spanish and French at Stanford University. She remained at Lone Mountain until 1969 when she moved to teach Spanish at the Society’s San Diego College for Women, now the University of San Diego. She taught in the Foreign Languages Department for 34 years. From 1972 through 1987, she spent nearly every summer teaching in Guadalajara, Mexico. Upon retirement from USD she joined the Oakwood community in October, 2004.

Sister Mapa was active in several professional associations during her long teaching career. She enjoyed her large family and stayed in touch with nieces and nephews as the family grew. She enjoyed domestic arts such as sewing and knitting, but above all, she loved to cook, especially for others.

Sister Mapa earned her Bachelor of Arts and Master of Arts degrees in Spanish at the San Francisco College for Women. Her Ph.D. was from Stanford University. She became a U.S. citizen November 20, 1970 after a long and arduous process.

Mother Mapa was a hard professor, but I learned so much from her. She was one of the sweetest people I have ever known. I spent one Easter vacation with her amazing and generous family in San Francisco. They truly valued education and her family's accomplishments were impressive. I went with her to select clothing when the order was transitioning from the habit to contemporary clothing and she was like a child in a candy store even though she preferred mostly the short habit for years afterward. She was an inspired and patient spiritual advisor. I was the beneficiary many times of her wonderful cooking and still wish for a dish of "Mapa Rice". Mostly I just remember her unconditional love. I am grateful I was blessed with her presence in my life.

I have so many wonderful memories of Sister Mapa. She was by far the kindest most hardworking professor I had at USD. My friends and I enjoyed many Mapa feasts. I will never forget her.