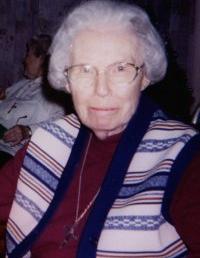 Religious of the Sacred Heart Mary Bush, educator and program director, died at Teresian House in Albany, New York, on Saturday, November 10, 2012. Known for her sense of fun, affection for the students, and commitment to the elderly, she will be remembered at a Mass of Christian Burial at 1:00 p.m. on Monday, November 19 at Teresian House. Visitation will begin at 11:30 a.m. in the chapel. Burial will be in the Kenwood cemetery in Albany.

Mary Bush was born December 26, 1919, in Ballston Spa, New York, to J. Edward and Margaret Condon Bush. In addition to her parents, she was preceded in death by her dear aunts Anne V. Bush and Marguerite Bush De Pasquale, who helped to raise Mary after her mother’s death, and a sister, Margaret Ann Bush, who died as an infant. She is remembered with fond affection by Religious of the Sacred Heart around the world, former students and colleagues and the staff and residents at Teresian House, where she was loved for her bright smiles and frequent chuckle.

Drawn to the contemplative charism of the Society of the Sacred Heart, Sister Bush entered the religious community in Albany in 1947, against her family’s wishes and after working for several years in medical social work. She made her first vows in 1950 and final profession on July 29, 1955 in Rome.

Sister Bush served in a variety of roles in Sacred Heart schools from 1950 until 1984, beginning at Newton Country Day School of the Sacred Heart, Newton, Massachusetts. She served for many years at Eden Hall in Philadelphia, including as headmistress, from 1961 to 1965. She was also headmistress of City House in Montreal, Canada, 1965 to 1967 and Stuart Country Day School in Princeton, New Jersey, from 1967 to 1973.

Students always knew they were loved, as “Mother Bush” was fond of reminding them, “You are a child of God!”

From 1973 to 1982, Sister Bush served on the provincial staff of the Washington (DC) province as director of personnel and director of pre-retirement planning. She directed the Society of the Sacred Heart Fullness of Life Institute, an educational program for senior women religious, from 1973 to 1985. She was director of gerontology conferences at the Catholic University Gerontology Center from 1986-91. From 1991 to 1994, she recruited senior volunteers on behalf of the Family Friends of the National Capital Area. She then spent eight years as the coordinator of the senior volunteer program at Providence Hospital in Washington, DC. She retired to Kenwood Convent of the Sacred Heart in Albany in 2002 and moved to Teresian House in 2006.

Throughout her active ministry, Sister Bush sought to balance her apostolic life with her desire for a deep contemplative life. She felt called to imitate Christ in gentleness and humility – while acknowledging that those traits were not her nature! “My strength came from my union with the Lord,” she once wrote. “I hoped His life and love in me could accomplish the impossible.”

Messages from former students of Sister Bush create an image of a woman religious whose humanity and spirit showed through the habit of the early days of her ministry. Her deep love of the students was evident. One Newton Country Day School alumna noted, “I smile when I think of Mother Bush. I remember her as forever young, with such energy and a smile for everyone. For me, Mother Bush was a wonderful and fun woman and teacher.”

Sister Bush earned a bachelor of arts in social science, with a minor in philosophy, from the College of Mt. St. Vincent in Riverdale, New York. She also earned two Master of Arts degrees, one in medical social work from Fordham University and one in religious studies from Catholic University. She was a firm believer in adult education, routinely participating in conferences and symposiums. She was a long-time member of the National Council on Aging, the Thomas Merton Society lectures, and the Catholic Gold Age Association, among many others.

Memorial contributions may be made to the Society of the Sacred Heart, 4120 Forest Park Avenue, St. Louis, MO 63108.

How I admire Mary Bush.  I came to know of her and then came to know her as former Headermistress at Stuart Country Day Shool of the Sacred Heart in Princeton.  She was the second headmistress of a very young and in some ways fragile new school. A small enrollment, a large building debt, making one's way in the independent school world in Prineeton- these challenges did not crush her, but rather gave her new energy to carry on and to do her best to spread the love of the Heart of Christ to all.
I became headmistress years after she left but her mark was still evident on the school.  Alumane spoke with affection and recalled the senior pranks which they loved playing on her and which she took with such pateince and good cheer.
A gracious, holy, cheerful woman.  Our world is the better for her.
Joan Magnetti, rscj

I wrote Sr. Bush a year or two ago, thanking her forallowing me to attend Stuart while she was headmistress there. My mother had pleaded with me to attend Stuart and when I finally relented, and no doubt Mother also pleaded with Sr. Bush, had no idea how transforming the school and its leadership would be in my life. I am and will always be grateful that I was admitted to Stuart though my first year (junior year in the upper school) was her last there, I was forever changed in Christ.

A wonderful woman who left us with loving memories and great examples as to how to live ones life.