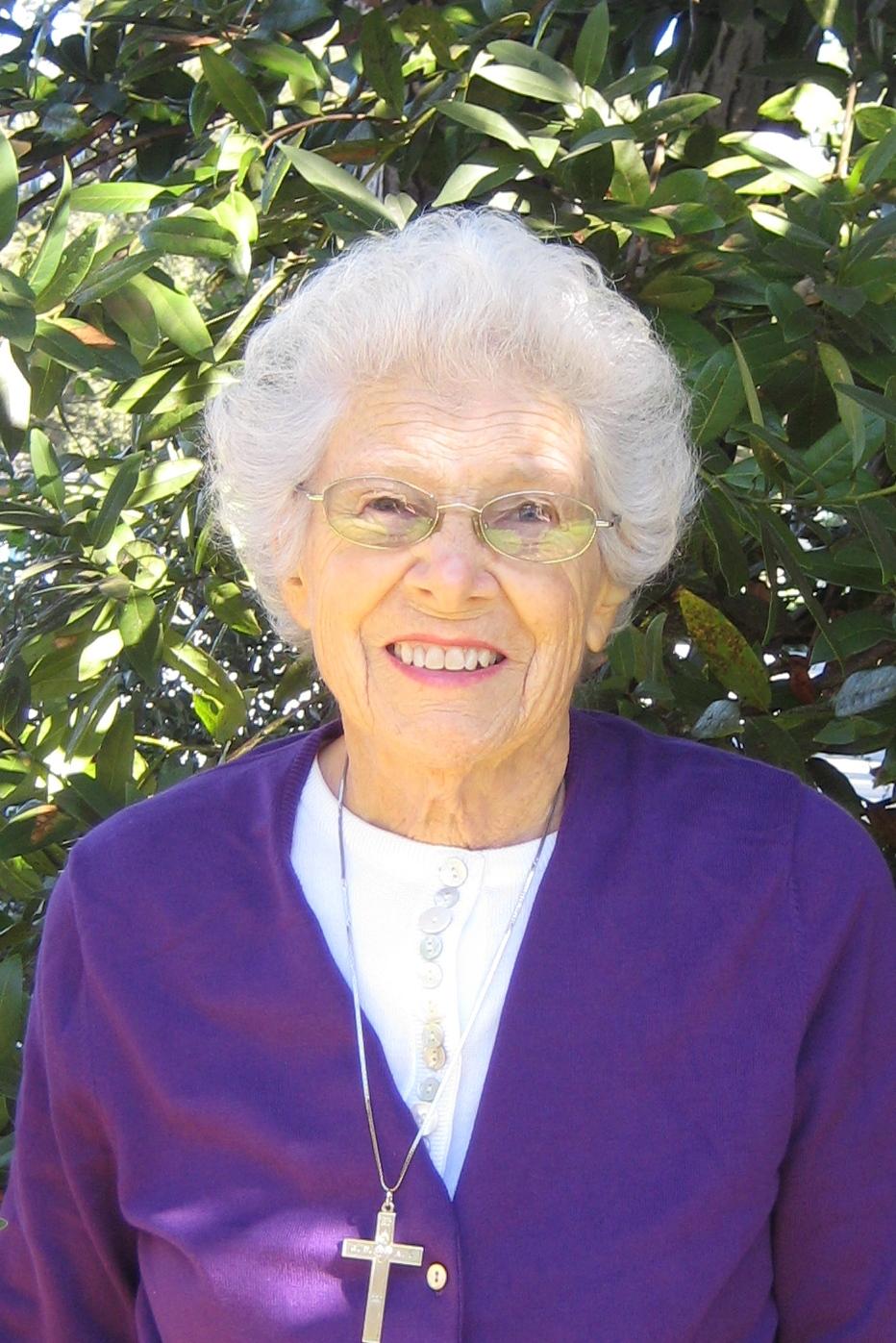 Religious of the Sacred Heart Marjory Maxine Kraemer died Wednesday, November 28, at Oakwood, the Society of the Sacred Heart’s elder care center in Atherton, California. A lifelong educator, Sister Kraemer was committed to educational justice, especially for people with developmental disabilities. Her life will be celebrated in a Mass of Christian Burial on Saturday, December 29th at 10:00 am at Oakwood, 140 Valparaiso Avenue, Atherton, CA 94027, followed by burial in Oakwood's cemetery. A Memorial Mass will also be held in Founders Chapel at the University of San Diego at 12:15 p.m. on January 9, 2013.

Born June 9, 1924, in Anaheim, CA, to Elena Mari and Arnold R. Kraemer, Maxine (known as “Mackie”) was the second of five girls. In addition to her parents, she was predeceased by a brother, Arnold Kraemer, Jr., and three sisters, Flavia Kraemer,  Lucille Kraemer, RSCJ and Alice Kraemer. She is survived by her sisters Evelyn Kraemer Francuz, Fullerton, Ca.; and Angelina Kraemer Kleinbub, La Jolla, Ca.

Maxine Kraemer first met the Society of the Sacred Heart when her oldest sister, Lucille, chose San Francisco College for Women (Lone Mountain) for her undergraduate studies. At Thanksgiving her father announced that Lucille would not come home for the holiday because he wanted the family to visit the wonderful place that had made her so happy. Maxine reported, “As long as I can remember, I’d had a vocation, but this visit greatly influenced my future. I chose Lone Mountain for my college education. I knew that God wanted me to be a part of this extraordinary group of women, who were so loving and dedicated, and whose education was superior to anything I had experienced in twelve years of Catholic education.”

Lucille Kraemer entered the Society of the Sacred Heart in 1943 in Albany, and her younger sister Maxine followed on September 6, 1945. Maxine professed first vows in 1948 and final vows in 1953. She will be remembered with great fondness by her sisters in the Society of the Sacred Heart, generations of students and colleagues, and the staff at Oakwood.

Sister Kraemer’s first teaching assignment was at the Convent of the Sacred Heart in San Francisco, 1948-51, where she taught younger grades. In 1951, she moved to the Convent of the Sacred Heart in Menlo Park, Ca., where she taught English, science and math, had full charge of the Middle School, managed athletics for the Junior School, had the Glee Club, was dormitory Mistress, taught music appreciation, was charged with the Nuns’ Choir, and was organist as well. In August 1961, Sister Kraemer moved to El Cajon, Ca., to launch the junior school at the Convent of the Sacred Heart and to teach middle school grades. She also gained experience teaching special religious education classes. In 1968, she became president of St. Madeleine Sophie’s Center, originally a school for developmentally disabled children, which now serves adults with developmental disabilities. She would stay for twenty-four years. Among her accomplishments at the center was a supported work program, placing developmentally disabled adults into integrated community jobs, for which she received local and national recognition.

After retiring from St. Madeleine Sophie’s Center in 1992, Sister Kramer spent one year as director of development at Whispering Winds in San Diego, then served as a reading specialist at the San Diego County Education Center. She served as the director of the Sacred Heart Associates program in San Diego for several years. Having many hobbies and interests, especially the fine arts, she attended operas and symphonies, took cooking classes, played bridge, and traveled. As a plant lover, she cultivated gardens both inside and outside. She also described herself as “the first one at any party!”

Sister Anita Lapeyre, RSCJ, said of Sister Kraemer, “She was always happy in whatever God sent her to do. What was so prevalent about her was her constant trust in God. She always felt that God would be present in whatever was to be accomplished and that nothing was impossible. Her gratitude for the beauty of the earth and for the loveliness of the people that were in her life motivated her to give her all. Acceptance, trust and unbounded love for God and all creation were values that I will forever remember as gifts that Mackie gave to all who knew her.”

In October, 2010, Sister Kraemer moved to Oakwood, where her bright personality added to the loving environment of RSCJ there in retirement. Early on November 28, Mackie quietly joined her sister Lucille and so many of her loved ones as she answered the call of her Beloved God, “Come, enter into my joy.”

In addition to her Bachelor of Arts degree from Lone Mountain College, Sister Kraemer earned two Master’s degrees, one in music from Stanford University and one in Education from the University of San Diego. Her teaching certificates included one for special education. She established and served as executive director of the Kraemer Endowment Foundation, which supported St. Madeleine Sophie’s Center. She served on the boards of the American Association on Mental Deficiency and the Council for Exceptional Children, the National Apostolate for the Mentally Retarded, and St. Vincent’s School (Santa Barbara, Ca.) and was a member of numerous other organizations.